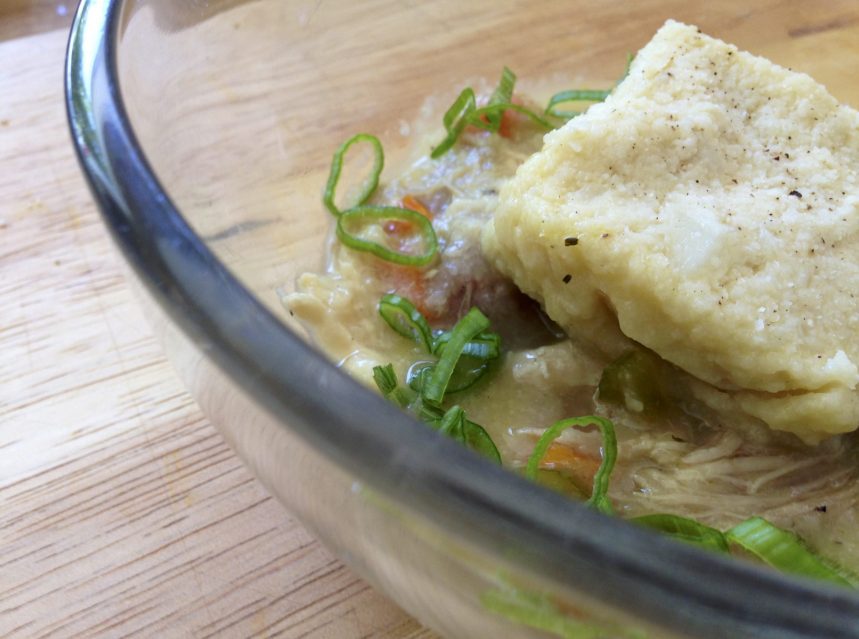 Cauliflower dumplings might sound, well, strange, but I promise you that this recipe will be a pleasant surprise, especially for anyone out there craving a Chicken & Dumpling soup made with whole ingredients and without gluten or dairy.

During my squeaky clean Paleo days, I really missed chewy dumplings in a creamy chicken soup come fall. Both of these things can be difficult to achieve in a diet that omits grains, gluten, and dairy.

And while cauliflower has proven to be a magical substitute for both flour and cream, sometimes that sulfuric smell is just too much to handle. The trick is knowing how to calm that down and emphasize other flavors that make the cauliflower work for you and not against you…

This is the affordable way to make the bread-like component you’re missing. Almond flour-based recipes can be really expensive (not to mention that if you’re taking a Paleo approach to your diet, all of those nuts can actually be problematic). So you’re saving money right off the bat, which I love… you love… everyone loves.

Beyond creating a dough alternative, cauliflower also provides the base for our creamy soup texture and flavor. Pureeing florets that cook right in the chicken (or turkey) stock with salt, pepper, and dried thyme helps neutralize any strong flavors or odors and brings forward a savory base that suits the soup.

By pulsing the cauliflower to a rice-like texture first, then steaming and straining with a cheesecloth, something incredible happens. All the moisture leaves the cauliflower (and with it a lot of the strong flavor), and what remains honestly feels like masa flour.

Then by mixing the strained cauliflower with an egg and the flours, you’ll get a kneadable and moldable dough!

I sure hope I haven’t lost you at this point.

Knead and press into a half-inch thick square, then divide into nine sections to get low-carb, nut-free, budget-friendly dumpling dough!

The cauliflower dumplings are placed atop creamy chicken (or turkey) soup and steamed to cook, just like with traditional flour-based dumplings. They come out chewy and flavorful and absolutely check the box.

So there you have it. A gluten-free, grain-free, budget-friendly way to make a creamy chicken soup with cauliflower dumplings.

Did you have a chance to make this recipe?

How did you like the cauliflower dumplings? Did you customize the soup at all? Let’s swap ideas in the comments below. 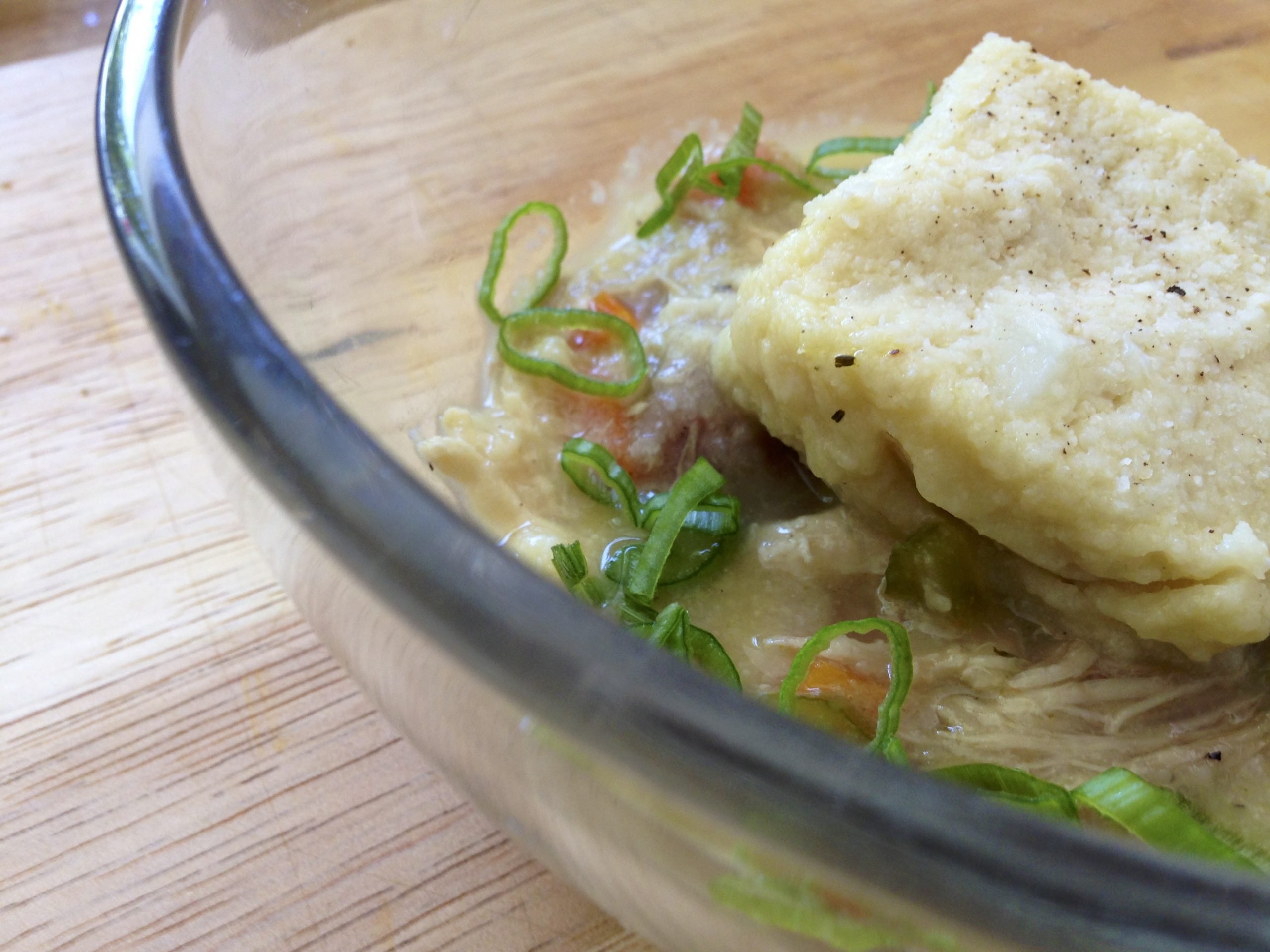 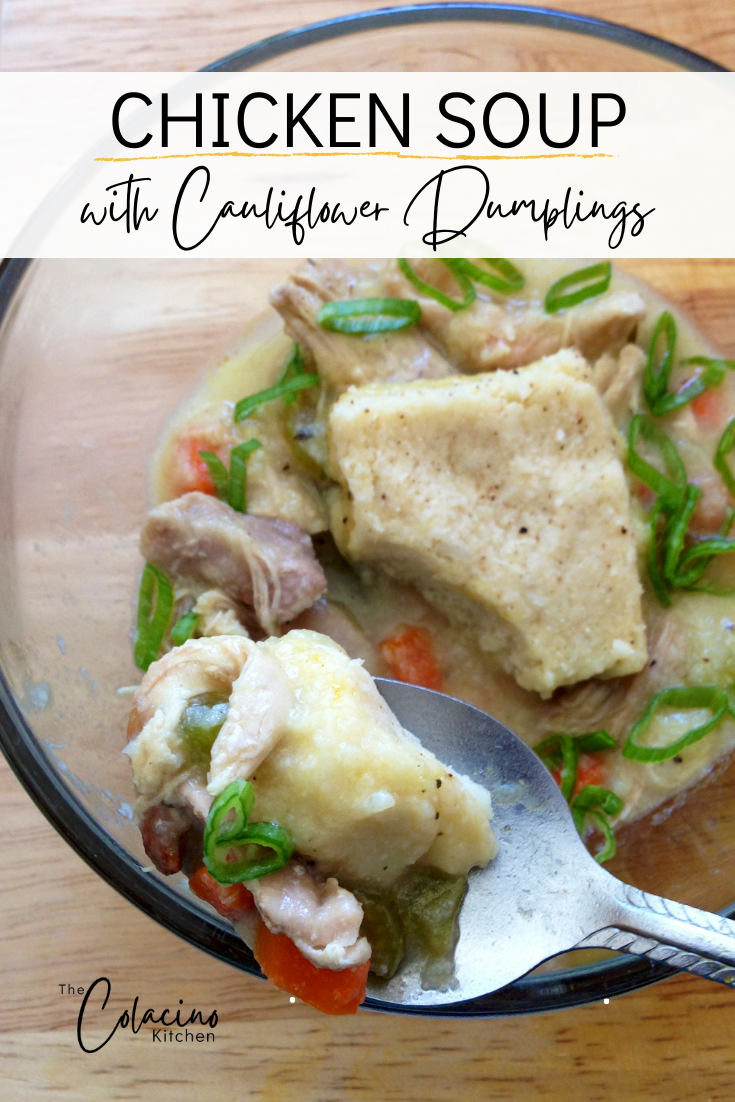 This div height required for enabling the sticky sidebar

Time to Make Something Good We're all about making memories while enjoying great food, drinks, and company here at The Colacino Kitchen. I retired my old blog, Popular Paleo, in order to write recipes for all diets or no diet at all. Cheers to you doing you, boo. I love this program because I believe a healthy diet ought to focus on more than just your waistline… Your WASTELINE matters too!

Become a Sustainavore today and save $50 off enrollment with the code MEAT4HEALTH: Learn More Here

Join my email list to receive free recipes
that help you make simple meals from scratch.

We use cookies on our website to give you the most relevant experience by remembering your preferences and repeat visits. By clicking “Accept All”, you consent to the use of ALL the cookies. However, you may visit "Cookie Settings" to provide a controlled consent.
Cookie SettingsAccept All
Manage consent

This website uses cookies to improve your experience while you navigate through the website. Out of these, the cookies that are categorized as necessary are stored on your browser as they are essential for the working of basic functionalities of the website. We also use third-party cookies that help us analyze and understand how you use this website. These cookies will be stored in your browser only with your consent. You also have the option to opt-out of these cookies. But opting out of some of these cookies may affect your browsing experience.
Necessary Always Enabled
Necessary cookies are absolutely essential for the website to function properly. This category only includes cookies that ensures basic functionalities and security features of the website. These cookies do not store any personal information.
Non-necessary
Any cookies that may not be particularly necessary for the website to function and is used specifically to collect user personal data via analytics, ads, other embedded contents are termed as non-necessary cookies. It is mandatory to procure user consent prior to running these cookies on your website.
SAVE & ACCEPT
Pin
Share
Email
Print